It has been quite some time since I wrote a blog, which I suppose is marginally embarrassing for a content writer. However, there is a saying about the tailor’s kids or something to that effect, and I suppose I was rather busy moving to a new country. However, if anything would compel me to retake up the blogging mantel it is the pandemic that is currently sweeping the world. Because, from a purely marketing perspective – the pandemic has truly spawned a tremendous amount of marketing – for better and worse.

Now, don’t get me wrong, as an events business owner, I suffered through every stage of grief as we slowly started to understand what corona meant. I hid in bed for a good few days and allowed for the denial, the anger, the bargaining and the deep and serious depression to wash over me. Before, finally allowing for acceptance – when I finally got myself out of bed and realised the world hadn’t quite crashed in on its head. And as a marketer – it was interesting both to be an active participant and a spectator as businesses very obviously and openly grappled with those emotions. Sending out messages more mixed than any fuckboy from an app, every business took time to come to terms with this “new normal.”

So in those earliest days of marketing confusion, we saw an inordinate amount of free webinars, posts about pivoting and a lot of #corona. I would compare this to the Wild West of marketing – a lawless territory where no one really knew how to position themselves. And there was a lot of panic, stress and misunderstanding. More than that, there was an assumption that no-one, but no-one was buying. And, that by selling you were basically an evil corporation profiteering off the pain of others.
Somehow this crackpot idea came to pervade our societal understanding of corona. That selling was evil, no-one was buying and the only appropriate response as a business owner was to offer lots and lots of free content. The only “socially acceptable” form of marketing in the time of corona.

Which, I hope we all now know – was, and is, utterly erroneous. Of course, spending patterns have changed and woe betide those marketers or companies who simply ignore the “C” word, because they are scared to upset the sensitives of their core demographic. Corona is here. Ignoring it is bad practice and does a disservice to the intelligence of your customers. However, consumers are still spending, they expect to be sold to – and creating intelligent marketing right now doesn’t make you the big, bad, corona causing bat. On the other side of the curve – I would like to remind all those fairly new content creators that advice on working from home with nuggets like – take a lunch break away from the computer or do yoga for ten minutes a day is really just not helpful.
And more than that, corona doesn’t mean you have to give a percentage of your sales to charity nor does it mean you have to slash your prices to a record low so you end up feeling resentful and angry about selling.
Yes, you may have to tweak your offering. Yes, you may absolutely have to use sensitivity in your marketing. But, let’s just take a look at some statistics of purchasing – obviously, these are from the States because that is the most comprehensive analysis I could find on the interweb. Which angers me as a Brit living in Israel, but if corona has taught me anything it is to pick my fights. Anyway, let’s take a look at Intertretaining who showed – rather unsurprisingly – that internet spending was up. And not just on basic necessities like food, but on a range of items. And I particularly like this quote which I am going to nab from then, “it is likely that increases in spending could be twice as high with the introduction of new services to meet demand.” Ya hear that – folks. “New services to meet demand.”
Personally, that resonates with me first hand. Naturally, devastated by corona and what it meant to my networking business I felt like the earth, had shattered on itself. But, then I launched ESN goes online – an online PAID programme with the top experts in Israel. And it worked. People paid, they got on board. 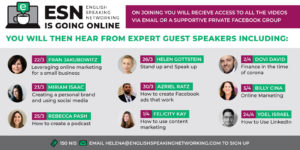 I am even launching another one next week – a programme that has been slowly and lovingly compiled – which has a clear focus and target and which, I sincerely hope, will see the punters coming.
But, I am absolutely not alone. Let’s look at some other small business owners – selling effectively in this time of corona. Let’s see the brilliant Debbie Sassen – who relaunched her programme, didn’t reduce prices and welcomed over 40 new students. 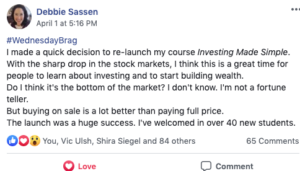 And some others quite clearly and blatantly selling during this time and doing a ruddy marvellous job of it.

Here Joel Klettke is – selling away and he even got 91 likes on his post. “Why could he get away with this?” I hear you ask. Well firstly, Joel is a truly stupendous force on social media who has always looked to help copywriters just starting out. Secondly, Joel is offering a great service that can benefit individuals right now. And, thirdly because selling right now is utterly and completely OK. Yes, I’m looking at you Sandra who is tutting and hissing. 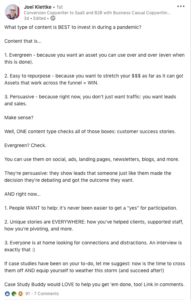 Finally, my last piece of evidence is Dot Lung and her brilliant online course which launched on March 11th, during corona and, to date, she has taken in 2220 students. Which, frankly is an exceptional feat in any time, never mind that of corona. 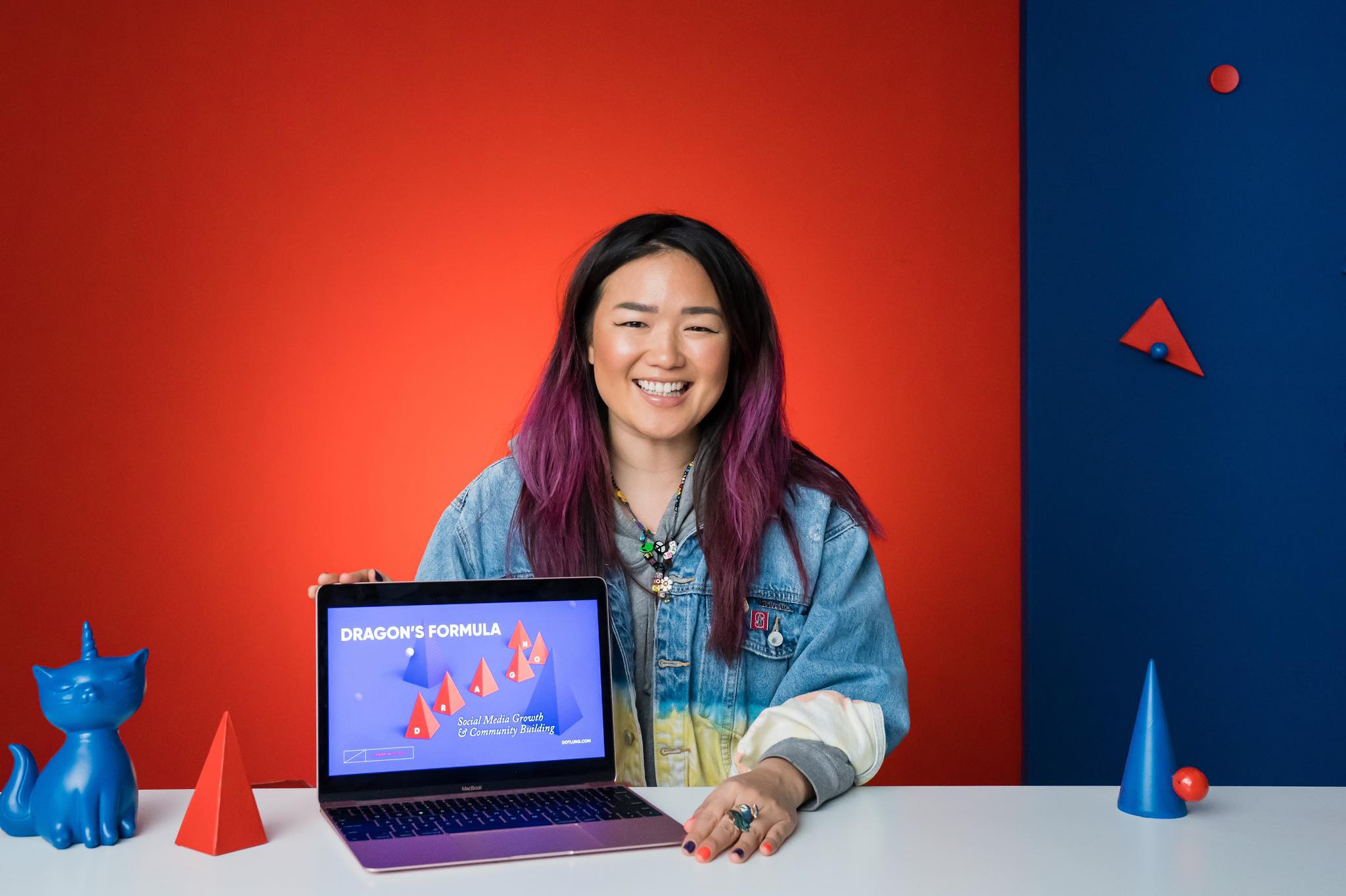 So people are buying – and you are allowed to sell. It doesn’t make you a bad person nor does it make insensitive.
That being said I do advocate rethinking your strategy – now is not the time to churn out content, but rather think gracefully and articulately about what sort of messaging you want to release during this time. Don’t avoid the “C” word